The pandemic has changed consumer behavior resulting in a huge boost for e-commerce. At pace with accelerating home delivery, the demand for cardboard is stronger than ever. Cardboard shortage puts cardboard recycling in focus and is bound to increase interest in recycling equipment. Industry experts agree that it is not a temporary surge in demand for online shopping. It has settled at a new higher normal and is a trend that is here to stay.

WIRED, an authority on the trends that are shaping our world, published an insightful article1 on February 17, 2021 about the impact of the pandemic on e-commerce and the demand for cardboard in general and in the UK in particular.

A great deal of the cardboard supply has gone to fulfil online retailers’ orders and the price of corrugated cardboard has increased in the last year from $25 to $75 a ton. Amazon set a record for the holiday season when delivering 1.5 billion packages worldwide over the Christmas period 2020. According to the Recycling Association there were an extra 200 million home deliveries at Christmas in the UK.1

Amazon has a giant share of the e-commerce market and it was recently estimated at almost one third of all sales. The impact is however mitigated by its revised packaging strategy to ensure efficiency in all deliveries. Part of it is the concept “fit-to-product-boxing” to better adjust the size of package to the items on order. Amazon now relies on artificial intelligence to calculate the best fit for orders, which sometimes means using an envelope instead of a box2.

Since 2015, Amazon has reduced the weight of packaging by a third in an average shipment and in total eliminated more than one million tons of packaging material. In the UK many businesses, including cardboard box suppliers, anticipated possible disruption at the end of the Brexit transition period and prepared for it by stockpiling. A combination of Brexit and very high online sales puts a strain on the industry.1 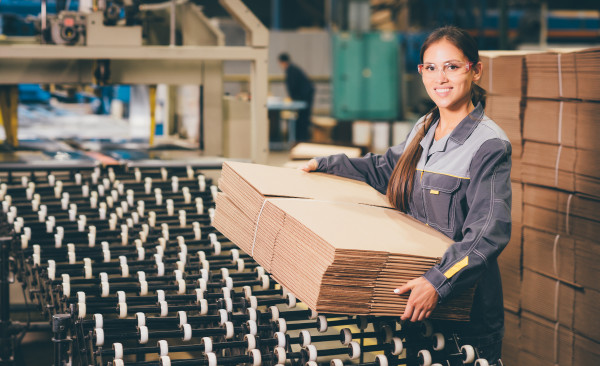 CARDBOARD SHORTAGE IN THE TRACE OF INCREASED HOME DELIVERY

Alex Manisty, Group head of strategy at DS Smith, the UK’s largest cardboard box manufacturer and supplier, commented that they were up to the production limit in December due to record online sales, the Brexit effect and not the least the world’s altered shopping habits due to the pandemic:

“It’s very unusual to have high demand in the US, in Asia and Europe, but because of Covid it happened at the same time”. 84 % of the 17 billion boxes DS Smith produced worldwide last year, were sent to consumers.  Mr Manistry adds: We’re already starting to scale our business to meet demand. It’s been one of those invisible industries: “Everyone has always taken it for granted, and growth over the last 20 years has been quite calm and steady, so it’s exciting for us to see the opportunity here to do something sustainable.”1

“IF THEY WEREN’T ONLINE BEFORE, THEY CERTAINLY ARE ONLINE NOW”

The e-commerce business has expanded remarkably the last couple of years and was clearly expected to continue to develop fast, but the pandemic speeded up the process significantly and it is not likely that the strong demand will drop off after the pandemic. Andy Barnetson, Director of packaging affairs at the Confederation of Paper Industries (CPI): “I think we’re going to see a longer-term trend into increased home delivery.”1

Mr Manistry is of the same opinion and believes the online shopping will stay on a high level: “We’ve got the older generation, who if they weren’t online before, certainly are online now, and are making a larger proportion of their purchases online. They’re not going to go back.”1

To be able to deliver the required volume of cardboard boxes, it is getting increasingly important to recycle a large percentage of the cardboard. According to CPI, about 80 % of the cardboard packaging in the UK is recycled and every new cardboard box is made up of about 75 % recycled material. An interesting fact is that before the pandemic, DS Smith recycled the large cardboard boxes it sent to traditional retailers within two weeks. The firm has contracts with large supermarkets to collect cardboard, bale it and deliver it to a paper mill in Kent to produce new cardboard boxes. Now, more packaging ends up in households where recycling is both lower and slower. Mr Barnetson: We would like councils to have a separate bin. The sooner we can sort cardboard from other materials the better quality we have further down the stream.”1

BOXES ARE PILING UP IN AMERICAN HOMES

The business reporter Hannah Denham wrote the enlightening article “How Big Cardboard is handling the 2020 box boom”2 in Washington Post on Dec 30, 2020 and describes a similar situation in the US.

Due to the skyrocketing e-commerce growth 2020, boxes are piling up in American homes and the cardboard packaging industry is for its economic and environmental needs dependent on increased cardboard recycling. After a short dip when the pandemic broke out, cardboard box shipments soon increased significantly due to retailers overstocking goods to meet the demand from consumers panic buying necessities. The shipments peaked in October and box producers ramped up to record production. Paper mills are still running at full speed.2

“TWO MONTHS IN A ROW WOULD BE A LOT, FIVE MONTHS IS UNHEARD OF”

Memphis-based International Paper, the largest forest products company in the US, produced more than 2.7 million short tons of corrugated packaging – an increase of 2 % according to its third-quarter earnings report. Chairman and CEO Mark Sutton said that they see “very strong double-digit growth in e-commerce, with increased consumer reliance on e-commerce as a spending channel”. 2

Normal years, the cardboard box demand peaks in September, but in 2020 the box shipments between June and October reached 34 billion square feet per month. “Based on data that we have dating back to 1999 (from the Fibre Box Association), this is a record,” said George Staphos, a senior analyst covering paper and packaging for Bank of America Securities. “Two months in a row would be a lot, five months is unheard of.”2

MORE CARDBOARD BOXES MUST STAY IN THE RECYCLING LOOP

A downside of the industry’s growth is the impact on the environment. Cardboard production has traditionally been linked to deforestation and it is important to make sure that the boxes stay in the recycling loop. Industry experts say that ensuring that the main part of those boxes do not end up in landfills needs to start at the beginning of their life cycles.2

Heidi Brock, President and chief executive of the American Forest and Paper Association stated: “More paper by weight is recovered for recycling from municipal solid waste streams than glass, plastic, steel and aluminum combined. As more people stay at home, it’s a good reminder that the box at your doorstep is designed to be recycled.”2

According to IBIS World report, the cardboard box and container manufacturing industry, which employs 139,000 in the United States, took in $67.3 billion in revenue in the time span Jan-Oct 2020 and it can largely be explained by changed consumer behavior and this development is most likely to continue as consumers increasingly choose e-commerce over traditional physical stores.2

Retail analysts assess that e-commerce sales in the first nine month since the pandemic began, equaled more than two years’ worth of growth. Mr Staphos, the Bank of America analyst commented: “At some point, yes, there was some pantry loading…, but I think we’re past that point and what we’re seeing here is new consumer behavior. Once you establish a new pattern, it’s really hard for it to change.” 2

SORTING AT SOURCE IS THE START OF THE JOURNEY TO RECYCLING

To conclude, the two articles provide a consistent view of the e-commerce expansion and the status of the cardboard market and in the UK and US and those trends are most likely the same for a big part of the world. E-commerce sales beat all records and the demand for online shopping is here to stay and will only continue to grow. The demand for cardboard packaging follows this upsurge. It takes time to increase production capacity in the industry and the cardboard shortage boosts demand for recycled material. It leads to a growing interest in cardboard recycling to keep the valuable boxes in the recycling loop. Industry experts point out that the journey to recycling starts early in the life cycle of a cardboard box. It is important to act and put systems for recycling into place at source. 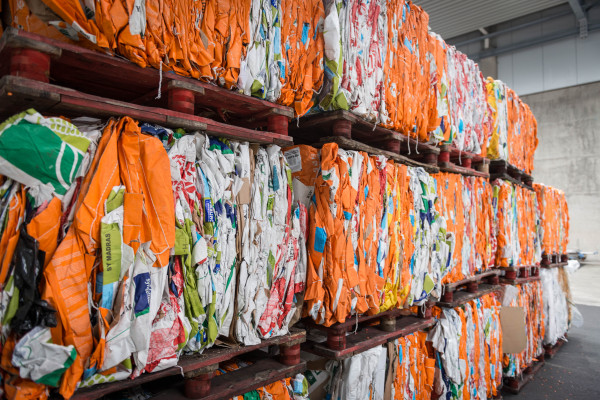 To enable and encourage recycling, sorting and compaction equipment needs to be implemented at the different locations where cardboard boxes end up; traditionally in retail stores but increasingly placing small balers in residential buildings to take care of the packaging from home deliveries and bigger more automated waste compaction solutions for large-scale packaging handling at logistic hubs and e-commerce warehouses. Balers come in different shapes and sizes to handle the packaging volumes on site. Sorting and compacting cardboard and other recyclables into clean fractions and compact bales directly at source is a vital link at the beginning of the recycling chain. It promotes increased recycling and baled waste provides recycling companies with a readily acceptable deliverable due to its high density and ease of handling.